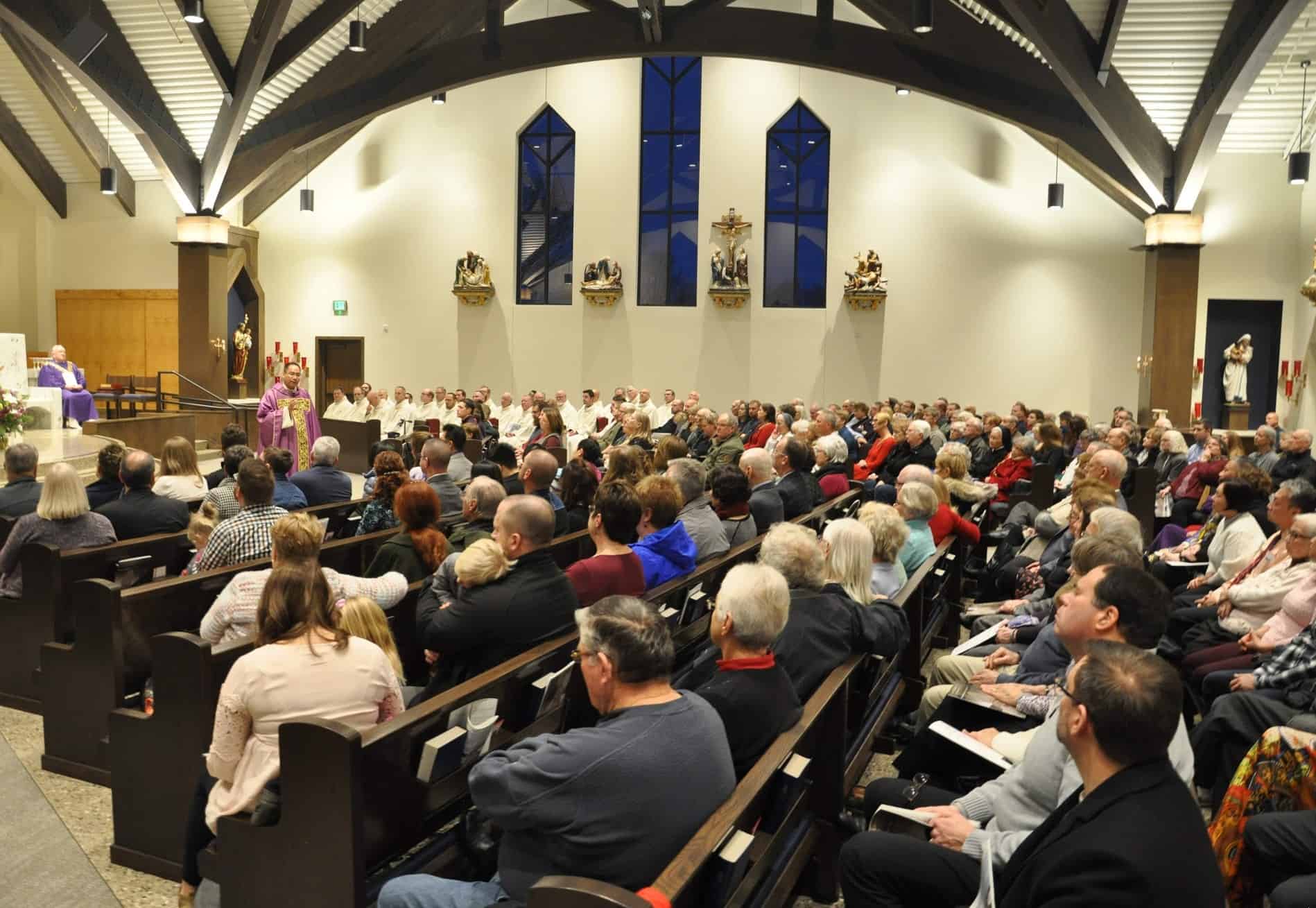 For many years, the faithful of the area yearned for a Catholic presence in Cedar Springs. What existed in dreams, and above all in prayers, became a reality with Our Faith-Our Future: A Plan for the Diocese of Grand Rapids, which was launched in 2009 and completed in 2012. The plan indicated a need for a new parish in Cedar Springs, Michigan. Most Reverend Walter A. Hurley, the 11th Bishop of the Diocese of Grand Rapids, implemented the recommendations of this plan.

In January 2013, the Diocese purchased property for a new Catholic parish, located at 3110 17 Mile Road, from Pioneer Christian Reformed Church, along with adjacent land located south of the Church property. On April 12, 2013, by a Diocesan Decree, Blessed John Paul II Parish was canonically and civilly established. The Decree also stated that “Blessed John Paul II Parish shall include the mission church of Saint Margaret of Scotland in Harvard and thus assume administration of its temporal goods and related responsibilities for maintenance of its buildings and cemetery.”

The facility began renovations during the summer of 2013, to make the space suitable for Catholic worship. It was determined that Mass would be celebrated in the fellowship area of the building, affectionally referred to as The Lounge, while the nave and sanctuary were being renovated. The first Sunday Mass was celebrated on the grounds of the new parish on July 6, 2013. It was on this very weekend that the Vatican announced the second miracle attributed through the intercession of Blessed John Paul II. Our patron would be proclaimed a saint! After several months of intense labor by parishioners and contractors, the space was ready for worship! The Most Reverend David J. Walkowiak, the 12th Bishop of the Diocese of Grand Rapids, blessed the Church and Altar on September 22, 2013. It was a very memorable day!

On April 27, 2014, our Holy Father Pope Francis, declared our patron Pope John Paul II a saint. Nearly 20 pilgrims from the parish, including our pastor Father Lam T. Le, gathered in Saint Peter’s Square in Rome, to witness this historical event in the life of the Church and our parish. In light of the canonization, Bishop David J. Walkowiak, the 12th Bishop of the Diocese of Grand Rapids, decreed to alter the name of the parish to Saint John Paul II, effective on the day that the Church enrolled our patron into the Book of Saints.

The response to Saint John Paul II Parish surpassed all projections. Growth came quickly. The parish began to experience challenges that come with rapid growth. Families were challenged to find a place to sit together, parishioners were forced to sit in the narthex or The Lounge, some families even chose to leave upon realizing there is no space for them. Parish leadership responded by forming a Master Plan, which included a new church and rectory. The Growing in God’s Merciful Love Capital Stewardship Campaign was launched in September 2016. This campaign has secured over $1.6 Million in pledges towards the construction of the new church, which began on August 19, 2018 when Bishop David J. Walkowiak presided over the Rite of Beginning Work on the Building of a New Church.

With great joy, on December 1, 2019 Bishop David J Walkowiak presided over the Mass for the Dedication of a Church as we gathered in our new worship space for the first time.

We would like to extend our deepest gratitude to everyone who has made this possible. To our visitors who do not belong to a parish, please consider joining us every Sunday and making Saint John Paul II Parish your home.

May Saint John Paul II bless us all…

“Do not be afraid…open wide the doors to Christ”
-St John Paul II, Homily at the Inauguration of his Pontificate, October 22, 1978